The people laughed at Noah.

But Noah knew that God had directed him. 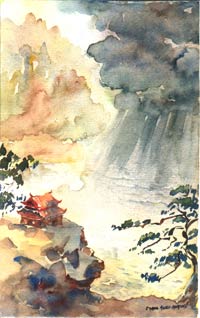 For a long time the ark moved on the waters.

Eventually, Noah opened the window of the ark and release a raven and a dove to see if the water had fallen.

The raven did not return but the dove did.

After seven more days the dove returned with an olive leaf in her beak.

After another week passed, Noah sent out the dove once more.

This time she did not return.

Noah looked and, behold, the face of the ground was dry."

Then the Lord told Noah to go out, with his sons, and their wives, and all the animals.

"And Noah went forth, and his sons, and his wife, and his sons' wives with him: every beast, every creeping thing, and every fowl, and whatsoever creepeth upon the earth, went forth out of the ark."

The first thing that Noah did when he left the ark, was to build an altar, and make an offering to God for His wonderful deliverance.

The Lord was pleased that Noah did this.

The account says: "And the Lord smelled a sweet savour;

and the Lord said in His heart, I will not again curse the ground any more for man's sake;

neither will I again smite any living thing, as I have done.

While the earth remains seedtime and harvest, and cold and heat, and summer and winter, and day and night shall not cease.

Then God promised that He would not, destroy the earth by a flood again.

In order that men might remember this promise, the Lord said: "I set My bow in the cloud, and it shall be for a token of a covenant between Me and the earth.

And it shall come to pass, when I bring a cloud over the earth, that the bow shall be seen in the cloud: and I will remember My covenant;

and the waters shall no more become a flood to destroy all flesh.

And the bow shall be in the cloud;

and I will look upon it, that I may remember the everlasting covenant between God and every living creature."