Unit 16: The History Of Chess

The History Of Chess

Joseph Needham attributes to the star gazers of ancient China the transition of the game of Chess from the East to the West over a time span of more than two millennia.

Back in distant history they centred their philosophies concerning the heavens upon the constellation of the Great Bear, or Northern Dipper, which had special importance in Chinese polar-equatorial astronomy.

Historically speaking, chess has been associated with astronomical symbolism throughout its development, and especially so in ancient forms of the game.

Needham points out that these older forms derived from a number of divination techniques in which small models of celestial bodies were thrown or positioned upon special boards used by a diviner and termed the shih.

This was a double-decked cosmical diagram which represented the earth by a square base board and the heavens by means of a rotatable heaven-plate. 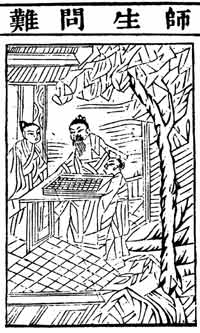 Both were marked with the technical cosmological terms used only in divination.

The central aim in divination was to assess the guiding role in man's affairs that was attributable to the heavens.

Their influence upon mankind was believed to be governed by the balance between Ying and Yang forces within the universe that might be in disharmony as they directed the affairs of men.

By divination, the degrees of contention between these forces could be assessed.

Long before chess became a war game in India the early forms of chess were practised in China as a development from the diviners art as he determined the influence of the stars upon the uncertainties of war and peace.

The positions assumed upon the board of the various cosmic symbols gradually gave place to their use in games of skill such as the early forms of chess.

Among the symbolic models which the diviner used was one that was shaped like a spoon and this represented the Great Bear.

In those early times it had special relevance because of its cosmological importance.

Among these symbols the spoon assumed even greater significance when it was realised in the + 1 st century that the "magical" properties of magnetism might be bestowed upon the spoon by making it of magnetite.

From this finding, further developments led not only to the game of chess but also to the magnetised needles that have found their place in the compass and in the various instruments of modem magneto-electrical science.

The game of chess was therefore not the only product of those who theorised about the heavens.

The transmission of their concepts concerning the relations between the heavens, the earth, the forces of Ying and Yang, and the everyday affairs of mankind gradually came to affect almost every aspect of life in the East

These conclusions provided the characteristic philosophies that underpinned Chinese existence, philosophies which have been much more difficult to appreciate in the West than have manoeuvres in the game of chess.