Unit 17: As A Plant Physiologist

As A Plant Physiologist

We passed so quickly from the happiness of our marriage to employment at CSIRO at Griffith.

As a student, I had no resources so we were indeed blessed that we could do so.

Our first duty in CSIRO was to help with a tomato harvest.

It was also agreed that they would act as Supervisor for the University, as there was no training provided in Plant Physiology within the University.

I first gained an honours degree, for which I had to take an exam in French and German science literature.

My wife was remarkably patient, for at the last minute I was told of this requirement and she was expecting, and was sitting inconveniently on a travel case, whilst I was receiving lessons in German at home.

I had never learned any German, this was our first child and we had no money.

Fortunately, we scraped up enough cash to buy a cane chair so that she could be comfortable until our babe was borne.

I spent the next nine years in chemical analyses of the individual plant parts and in their statistical appraisal.

A great proportion of this was done of an evening because I was mindful of its implications for the Masters Degree and also because I was a mad scientist.

Fortunately, my wife gradually tamed me by reason of her great natural charm. 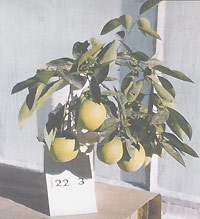 During this time I expressed the view at a science congress that one should be able to grow fruiting citrus trees on cuttings and so avoid the long period involved in the development of trees to the fruiting stage.

It might also avoid the uncertainties of large scale field experiments.

It proved to be successful and clearly demonstrated the importance of correct nutrition with greater certainty than had field experiments.

I was told that the Degree of Master of Science (Agriculture) had been awarded when I called at the Faculty in Perth on the way to England with the family in 1947.

I was also told by Professor Underwood that the examiners in

Melbourne University had recommended the work be granted a Ph.D., but as I had not fulfilled the required residence at the University I would have to wait until I had.

The ensuing years of family needs made this impractical and I never returned to the University as it would have clashed with family needs.

There was one good response, though, I had received five increments of salary from CSIRO and had been awarded the trip to Oxford University and to California Institute of Technology as a visiting scientist.

The experience gained in these institutions and their associated visits to other laboratories was of great value to my work with CSIRO.

One had to work long hours but the scientific contacts were stimulating.

Tech, for example, a typical day commenced with an 8 am staff lecture and finished at midnight when the samples were scanned overnight for radioactivity.

You read them on the following morning when the staff lecture was finished.

Fortunately, we lived across the way and I could return during the day for family needs.

I was able to visit quite widely in Europe, the USA and Canada.

One found that there were marked differences in the scientific approaches of the different countries.

A striking feature was the tendency of men of outstanding ability to be selected to administer the work of others, who often were not as skilled.

This seemed to be a waste of skill and led to exhaustion of the skilled workers through the burden of administration.