"I appeal to Caesar!"

said Paul, "And to Caesar you shall go!"

said Festus, for as a Roman citizen, that was Paul's right.

Thus began his trip aboard a cargo ship to Rome, as prisoner.

Suddenly a terrible gale swept from the highlands of Crete and caught the ship.

The sailors had no time to wrench down the mainsail, and the ship was blown helplessly over the raging sea.

The storm showed no signs of abating, and eventually even the grain had to be thrown into the sea to lighten the ship.

The crew bound cables beneath the ship so that it might not spring a leak.

Thus day after day went by, and the crew and all the passengers gave up all hope of being saved.

Then it was that Paul came forward and speaking with a calm voice said:

"Sirs, you should not have left Crete, and suffered in this way.

And now take courage, for there will be no destruction of life among you, but only of the ship.

For the angel of God, whose I am, and whom I serve, stood by me this night saying: ' Fear not, Paul;

you shall be brought before Caesar;

and God has given you all those that sail with you.

Therefore, sirs, be of good cheer, for I believe God, that it shall be even as it was told me.

However, we must be cast upon a certain island."

At Paul's words the hopes of all aboard revived.

He took some bread, and in front of them all, gave thanks to God, broke it and began to eat.

It was on the fourteenth night that, the sailors began to suspect that the ship was nearing land.

They lowered four anchors from the stem to keep the ship's high prow facing land.

There was nothing else to do except wait for daylight.

They spotted a bay ahead and decided to let the ship run aground there.

"We will answer with our lives if any of them escapes."

But the centurion wanted to save Paul and refused this, declaring that all who could should swim to the shore whilst the rest should use pieces of floating debris to support them.

They cut off the anchors and hoisted the sail to catch the wind.

Thereafter they made smooth sailing.

But the ship ran on to a sandbank and stuck fast, while the stern broke to pieces in the stormy sea.

Holding on to planks and broken pieces of wood from the ship everyone came safely ashore. 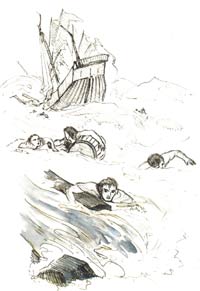 It was raining, but the friendly islanders told them that they had landed on Malta.